Since April, nine Black, Indigenous or racialized people in Canada have died in interactions with police. Regis Korchinski-Paquet, Ejaz Ahmed Choudry, Chantel Moore, Rodney Levi, Stewart Kevin Andrews, Jason Collins, Eishia Hudson, Caleb Tubila Njoko and D’Andre Campbell were loved, valued and should be with us today. Most of them lived with mental health issues and were in crisis when police arrived.
As political leaders, we cannot ignore that the deaths of these Black, Indigenous and racialized people are part of a pattern of police interactions that stretches back years to include Andrew Loku, Josephine Pelletier, Abdirahman Abdi, Sammy Yatim, Greg Ritchie, and far too many others.

It is clear that protecting Black, Indigenous and racialized lives urgently requires an unprecedented and historic shift in the way we view policing and the health and safety of our communities.

Tens of thousands of people in communities across Canada have marched in the streets demanding justice, an end to systemic racism and fundamental change to policing - including the defunding of police and reinvestment of this money into social services that will allow our communities to thrive. They are calling for these changes because they know that for Black, Indigenous and racialized people in Ontario, interacting with police means potentially putting your life at risk. This prejudice is hard-wired into our institutions. It’s systemic. And as leading Black health experts and the Toronto Board of Health note, it’s a public health crisis[1].
We cannot and should not simply dismiss the call to defund police. This is a conversation that is long overdue. For too long, the province has ignored these calls for change. No one should die after calling 911 for help. No one should feel the unimaginable anguish of seeking help for a loved one, only to lose them – possibly before their very eyes.
We have a responsibility to act, and the Ontario NDP is committed to stopping the violence and saving lives – from changes that we as legislators can make immediately, to a broader vision for the future. If we come together – ensuring that Black, Indigenous and racialized communities are centred as architects of change – we can build a future where we spend less on armed response to crises and failed approaches to community safety, and more money, resources and energy are dedicated to the health and wellbeing of our communities.

People across Ontario are rightly demanding fundamental change to policing and a long overdue shift in government priorities from armed police response to a focus on community safety, wellness and supports. They understand that truly addressing the deep, institutional issues we face, means taking a hard look at our province’s priorities, starting with policing.
As legislators, it’s our job to listen, participate in these conversations, and act in full solidarity with people seeking justice. Below are some of the first steps that government can take immediately to begin building the better future people are envisioning.

Change is possible. If we have the political will to seize this moment, and finally address the deep institutional blight that has devastated Black, Indigenous and racialized communities for far too long, we can make our province a better, safer place for all Ontarians, now and for generations to come. 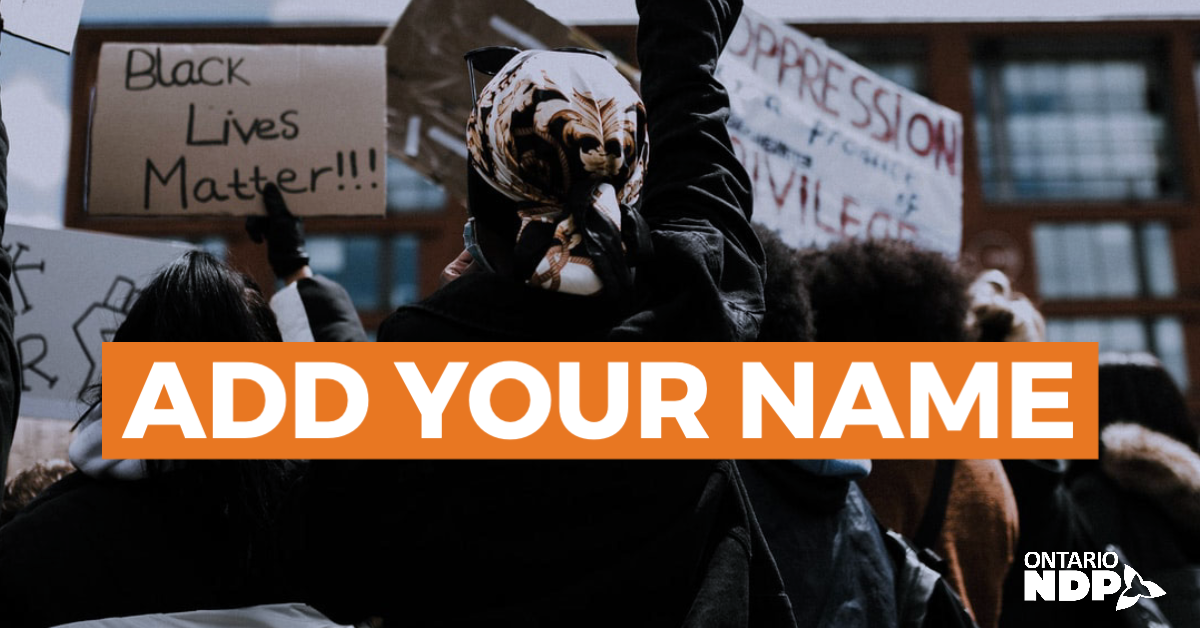 Add your name now, and join this fight to end police violence and tackle systemic racism.